I Can See Russia From My House

I can’t take most of what I read on Trump and Russia seriously. It’s not that my mind is made up, or that I’m not willing to listen. It’s because most writers are not bothering to examine even their strongest assertions, even though they’re really easy to poke holes in. The biggest one is the common thread underlying all good conspiracy theories: an unreasonable assumption of general competence.

We are told it is now a matter of fact that Russia has an army of hired trolls which has successfully swung a referendum and an election. They did this, among other things, by injecting carefully tailored messages and posts which blend seamlessly into the native culture, many of which were lies. They also exfiltrated and leaked sensitive material strategically to fuel these efforts.

Ok. Our current native culture is one of omnipresent political infotainment. This practice, which arguably began in its current form with Fox News in the Bush II years, slowly but surely spread to all the American news channels, turning TV into the swamp it is today. But it didn’t stop there, because we now have YouTube. There is an industry of entertainers who are all willing to be as biased and partisan as you want them to be, and they compete with each other for attention and Patreon dollars, all the way into the fringes. Isn’t it a bit presumptuous to think anonymous Russian trolls and bots would do a better job in influencing audiences than thousands of dedicated infotainers with a personal brand to build and maintain? Social media is as successful as it is because of that personal connection, one-sided as it may be. No matter how devious, it is difficult to imagine how that could be manipulated more effectively than what is already done a million times every day, by influencers, marketers, journalists, humanitarians, PR agents and other social professionals.

Even if you grant that politics is a special target, that the stakes on the world stage are much higher, and that there are extra-legal methods available to some actors, it’s still hard to counter the collective force of a bunch of people eager to say anything for a paycheck. Who influences the influencers? Anyone and everyone, that’s the thing.

Well it’s all about information, we are told. The wealth of personal demographics that can be mined from Facebook and Twitter is so rich that it can lead to precision targeting of both individuals and groups, localized or diffuse, with tailored messages and calls to action. This was the Cambridge Analytica privacy scandal of 2018. It was perhaps slightly deflated a few months later when the EU’s GDPR forced every third rate news site to admit they themselves typically have over a hundred third-party data trackers embedded, many even less accountable. So yes, tons of data is being collected, but everyone is doing it. Which leads to a similar question: with all the various first, second and third party data sets being constructed and used, why should this have devastating, treasonous, even apocalyptic effects in right-wing politics specifically, but not elsewhere? In particular because the CA scandal was deflated even more by the reminder that the Obama campaign had built an entirely similar database a few years prior, with Facebook’s explicit promise to look the other way. What’s bad for the goose is bad for the gander.

Which leads to my second major question about this case. Even if you assume Russians are fiendishly effective at what they do, and the internet is a ticking timebomb of guerilla dystopia, their goal is simply to destabilize. In that case, wouldn’t they be egging on the extremes on all sides, fanning flames both left and right?

Where did this post-2012 intersectional wave come from anyway? Intersectionality has been around since the 90s… what changed? Well, the opportunity to make use of it, I suppose. Social media serves as a very effective amplifier for stories, particularly if they come with outrage on the side. An ideology that promotes a constant critical examination of victimhood and oppression fits very nicely with that. The bad things that happen are a symbiotic ingredient of the global coffee klatch. Even better if the invisible dominant powers of society can be read onto these interactions themselves, even if people are typing them one handed while wiping their bum with the other.

(As an aside, I humbly propose this as a new definition for ‘splaining’).

So suppose you have a stratum of politically engaged youngsters looking for a reason to feel oppressed, individually and collectively, and a class of media professionals eager to farm them for engaging (read: outrageous) content… Well, it would be hard to find a crowd more eager to turn even the smallest slight into the definite End Times and amplify them all over the planet. It would be both easy and tempting to give that perpetual commotion machine a good spin up. If you wanted to destabilize.

Or, if you want to go all tinfoil, maybe the birth of the progressive stack at Occupy Wall St was a divide-and-conquer seed that blossomed into a permanent fixture. It matured right in time for the Clinton campaign to use it, and bring us 4 years of non-stop gender coverage, with everyone playing along obediently as everything from Google searches to air conditioning somehow became bad for women and minorities. Sorry Joan Rivers, it wasn’t until Ghostbusters 2016 that we knew women could be funny. And if you don’t think Black Lives Matter is the superior sequel to the 60s classic the Civil Rights Movement, numerous entertainment outlets can educate you on that.

The story they themselves tell, of the birth of the nazi alt-right and the scourge of the cis white men in the underbelly of the internet who just showed up to be hateful, it’s a good Genesis story, but that’s the only value it has here given that the ‘SJWs’ were the actual intruders and they are not a credible witness. That’s not to say the alt-right isn’t real or can’t be nasty, rather, I’m just saying Milo Yiannopolous is the Shanley Kane of the right.

Regardless of what’s the true cause of their malaise, the effect has occurred. In their overreach in response the mainstream left has given the right a genuine casus belli over real censorship and unquestionably bad faith engagement, and alienated a good chunk of its own wing in the process. It’s particularly ironic that a left that used to champion free speech and anti-corporatism under Bush now campaigns for the use of corporate platforms to control it. Even media professionals support this, as they plead for the sanctity of journalism with their other mouth, and seem to look side-eyed at the big technology platforms who stole their sector’s collective lunch.

A curious Moloch has emerged in this process: the bug bear of the Algorithm. Apparently, when fed sufficient amounts of data, computers absorb the evils of the world algorithmically, and visit the sins of the users upon each other. I mean, at a basic level, this is true, seeing as most of what passes for AI these days consists of networks studiously trained just to replicate enormous data sets from the real world. But the interventions taken in the name of controlling the Algorithm are most certainly human, run along well worn cow paths of political drama, and have more than a little whiff of techno-catholicism to them. If the Algorithm is so unknowable, then it is presumptuous to assume you do in fact understand this particular God. The fact that recommendation algorithms only feed us our own outputs also deflates the doom somewhat: if there is a runaway effect happening, the cause is in the humans, not the algorithm. It also provides a very obvious solution: if you want the virtual world to be better, improve the real one that’s feeding it. I think Dove had something important to say about airbrushing out the flaws in the digital copy.

Basically, it’s difficult to take warnings about Cthulhu seriously when we can all see the tentacles coming out of their mouth and their websites are covered in fungal spores.

There’s another, simpler explanation of course, omitted above. Which is that the Russians were ineffectual, the Clinton campaign clueless, Trump a deluded bull in a china shop and the three letter acronyms just climbing the corporate ladder at Dystopia-as-a-Service to pay the bills. All of this just happened serendipitously, and the most you can say about causes is that humans suck at big numbers and that in late capitalism, communism is just a personal brand.

I think it’s their own fault though. If a journalist reported only what they saw outside their window, you’d think them an idiot, but if a blogger reports what they see on Twitter, they call it Breaking News.

And they want me to be worried about Russia. 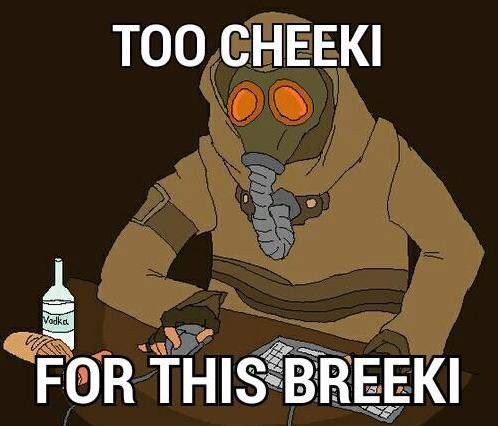 Iconoclasm as a service. It's not only all true, it's extremely possible.
View all posts by samuelthefifth →
This entry was posted in Uncategorized. Bookmark the permalink.

5 Responses to I Can See Russia From My House

This site uses Akismet to reduce spam. Learn how your comment data is processed.